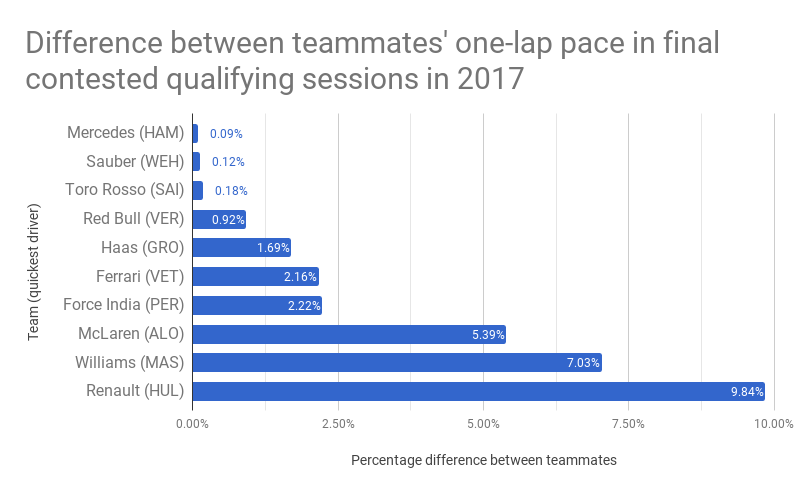 Since the beginning of the season I’ve been working hard on one data set in particular – ‘The Palmer Index’, as I’m coming to know it.

The index shows, among other things, the scale of Jolyon Palmer’s horror season at Renault. He surely won’t be allowed to continue much longer if he cannot close the performance gap to Nico Hulkenburg.

Once again we’re looking at qualifying pace, though I will eventually look at race data.

Why make the Palmer Index?

In qualifying, there are fewer opportunities for external factors to affect the result; we can get a better view of a driver’s raw speed.

Comparing teammates is relevant because it’s two drivers in more-or-less-equal machinery. They are the first and most accurate litmus test for a driver.

With this data, I’ve calculated the sum percentage-point difference between teammates’ qualifying laps for the season. Which laps? The fastest lap times from the last session in which the pair competed together.

It’s a P4 for Sebastian Vettel at the #AzerbaijanGP 🇦🇿 qualifying.

Great effort, with an old engine with many km behind 👏#Seb5 #F1 pic.twitter.com/DplPrjhOvC

Someone also suggested to me to include lap times from previous qualifying sessions that two teammates took part in – which is a good idea, and one I will work to include for the next instalment.  This new method would help mitigate the seismic effect on the data of Lewis Hamilton’s woeful Q2 in Monaco, or Daniel Ricciardo’s slow lap before that Q3 crash in Azerbaijan.

Oddly, Palmer’s failure to set any time in Q1 after his Renault’s engine failure has earned him a reprieve for the latest round, as there is no way to factor a ‘no time set’ into the data. The gap to Hulkenburg failed to grow for the first time this season.

And here’s how that looks in graphical form:

Beyond the improvements I already mentioned, I’ll be looking to factor in how this qualifying data tallies with race and championship results, always on the lookout for mitigating circumstances.

I also want to put this season’s numbers into a historical context – so I’ll be applying this method to seasons gone by, to see just how much of an abomination that 9+ per cent difference at Renault really is.

2 thoughts on “Teammates compared, after the Azerbaijan GP (part two)”