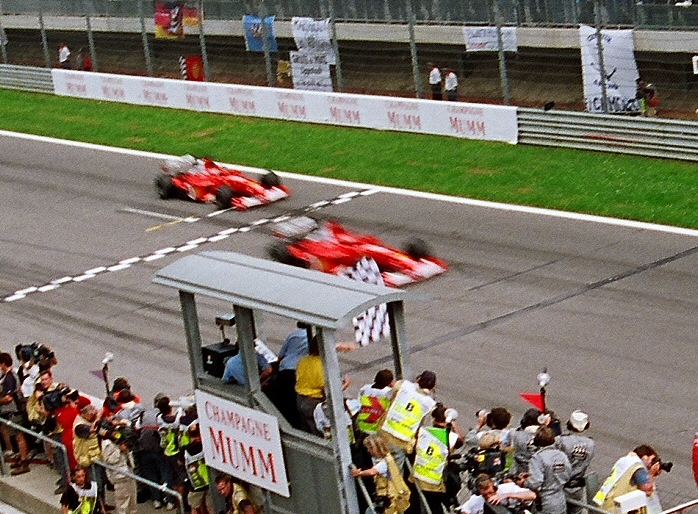 Definitely not Red Bull Racing, the Austrian former-champion team who were surely a big part of bringing F1 back to the, er, Red Bull Ring.

In the three races since the sport returned to the Eiffel mountains, the team have managed just three points finishes and one podium – Max Verstappen‘s 2nd place in 2016, a marked improvement on 8th and 10th for Daniel Ricciardo in 2014 and 2015 respectively.

While Red Bull still have a more-or-less excellent chassis, the lack of grunt from their Renault engines in F1’s hybrid era (2014 onwards) is rarely shown up more starkly than on the short, high-speed Spielberg circuit.

The Austrian Grand Prix has had an intermittent relationship with Formula One, held between 1970 and 1987 on the old Österreichring layout, before being brought back between 1997 and 2003 on a revamped track and then returning once more in 2014 after a 10-season absence.

Austria has thus missed the prime years of some of F1’s greatest names, and its multiple-winners list is missing some big names.

No Ayrton Senna, no Fernando Alonso and no Lewis Hamilton there – though the latter won here for the first time last year. Alain Prost is the outright king on race wins alone, and nobody will be able to change that at the 2017 Austrian Grand Prix this weekend.

McLaren are the most successful constructor at this race, with six victories courtesy of Niki Lauda (1984), Alain Prost (1985 & ’86), Mika Hakkinen (1998 & 2000) and David Coulthard (2001). Not that this history will console the team too greatly as they continue to battle their underpowered Honda engine in 2017.

Sometimes drivers are able to put together outstanding weekends where they get everything working for them, ad end up streets ahead of the rest.

Since 1997 and the move to the current circuit layout, the Red Bull Ring has not lent itself to such supremacy, with fine margins often deciding qualifying and the race.

However, some polesitters have notably blown away the competition, relative to those of other years.

In the 10 Austrian Grands Prix that have been held since 1997, Giancarlo Fisichella’s 1998 pole effort is the most outstanding in terms of the time margin to 2nd place – though this was in a rain-soaked qualifying session.

Fisi’s last-gasp effort in his Benetton denied Jean Alesi in the Sauber what would have been an arguably an even more sensational pole. Alesi was best of the rest, but a whopping 0.802 per cent slower.

Hamilton’s 2016 pole lap gave him the greatest margin a polesitter has enjoyed in the dry in Austria, ahead of Mercedes teammate Rosberg who was five-tenths (0.799 per cent) slower in 2nd.

Big mention here for Mika Hakkinen, who achieved the biggest winning margin at the Austrian Grand Prix in 2000 – evidently no fluke when you consider his dominance in qualifying (2nd place man was 0.54 per cent adrift).

However, the fact that he only won by 12 seconds (0.25 per cent of the race time) shows how close the races in Austria can be.

That 2000 edition was, ridiculously, David Coulthard’s fourth consecutive 2nd place at the then-A1 Ring. His frustrated pursuit of winner Eddie Irvine the year before made for a very close finish, but his tiny deficit of 0.3 seconds (0.006 per cent) was trumped as the smallest margin of victory in 2002 by the scheming Ferrari team.

The Ferrari team-orders farce of 2002

Michael Schumacher was 21 points clear of his nearest rival after the opening rounds of the season, but in Austria it was teammate Barrichello who nailed qualifying and took pole (2nd place: 0.41 per cent adrift).

Incredibly, come race day, Ferrari ordered Barrichello to surrender the lead and allow Schumacher to win… which he did, coming out of the last corner on the last lap. Schumacher’s winning margin was less than two tenths of a second (0.0032 per cent).

On the podium, the crowd booed. Schumacher, embarrassed, insisted Barrichello go on the top step – later earning an FIA reprimand for confusing the dignitaries handing out the trophies. Barrichello, so clearly the king of the Austrian Grand Prix that weekend, remained furious.

Ferrari can’t say they weren’t warned, though. Incredibly, they had asked Barrichello to do exactly the same thing at the last corner of the previous year’s Austrian Grand Prix, but for 2nd place. The manoeuvre didn’t become any more popular with repetition, and was instrumental in ensuring team orders were ‘banned’ for the next decade.