Brazil 2012 is held up as the ultimate championship showdown, but it lacks key elements that make or break the excitement of F1 title-deciders. 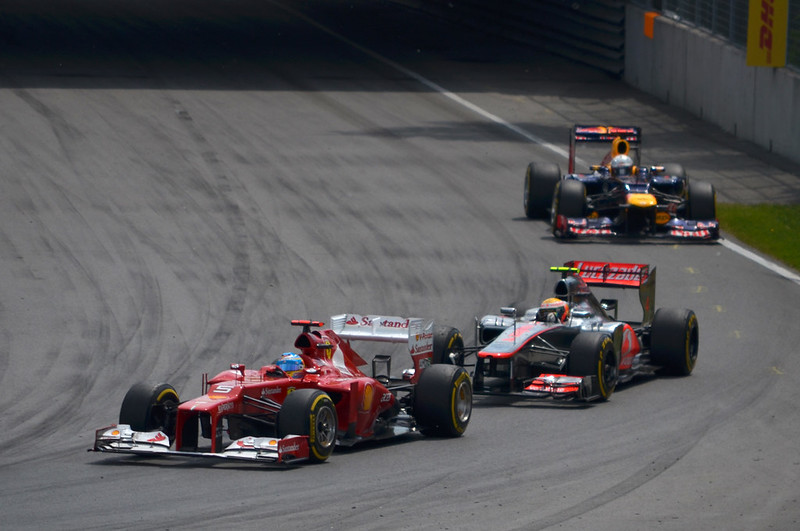 Formula One recently re-ran the full broadcast version of Brazil 2012 on its Youtube channel, sparking a lot of chat about it being the best race of the 21st century, if not all time. Proponents cited the unpredictability maintained by showers of rain throughout the race, causing particular upheaval to the order at the start, combined with the tension of it being a final-round title-decider.

But the favourite, Sebastian Vettel, came out victorious and, more pertinently, underdog Fernando Alonso never once looked like stealing ahead of his rival – every opportunity that arose was snuffed out within an instant, despite the Spaniard’s canny ability to keep the Ferrari among the top positions.

Watching the footage again, I recalled the same sense of inevitability I felt the first time around. I may have been surprised to remember that Nico Hulkenberg could, and should, have taken a maiden win for both driver and team in his humble Force India, but I was not surprised at ‘how close’ Alonso came to the title, because he never was very close – Vettel was always too hot on his tail.

The first lap – fine, I’ll give you that. When Vettel started poorly and was spun around by Bruno Senna’s Williams at turn four, the excitement was undeniable – not least given the obvious, ominous similarity with the case of a previous favourite, Lewis Hamilton, bottling the title at the same corner on the opening lap in 2007.

But by lap six, Alonso and Vettel were visible in the same camera shot, at either end of the short straight between turns five and six. Alonso was fourth, already adrift of the McLarens and the sprightly Hulkenberg, while Vettel was about to be handed 11th place by the spinning Lotus of Romain Grosjean.

2012 F1 season: Points accumulation by top six drivers, round by round

This inevitability was a far cry from, say, Hamilton’s ‘Is-that-Glock’ moment at this same track in 2008, where he took the title in the final corner of the whole championship amid a chaotic rainy end to the race. As a race, Brazil 2012 was terrific – but as a title-decider, it had much more in common with the infamous Abu Dhabi 2010 race, where Vettel claimed his first championship two years before.

At least that race had the novelty of a four-way title battle, and the eventual winner was ranked only third before the lights went out, having not led the standings even once all season. The 2012 season may have begun with six different winning drivers in as many races, but in 2010 just 25 points separated the top five drivers with only four rounds remaining.

Only F1’s second visit to Abu Dhabi, the 2010 title-decider is memorable solely for the driving of Renault’s Vitaly Petrov who, by my painstaking calculations*, is at least 86% responsible for the introduction of the Drag Reduction System (DRS) at the beginning of the following season – the overtaking aid upon which the sport now relies so heavily.

The final round of 2010 was equally consumed by the inevitability of a Vettel title win as it was in 2012. Early-stopping title contenders Alonso and Mark Webber spent the entire race staring at Petrov’s rear wing, eventually finishing a frustrated 7th and 8th respectively, consigned to 2nd and 3rd in the championship standings.

Maybe the tone had been set by Vettel’s imperious swoop to pole position the day before, if not by his two wins from the previous three races. Both 2010 and 2012 were marked by late-season surges in the German’s form, oddly alternating with his steamrolling domination of the 2011 and 2013 campaigns.

But what makes for an exciting finale is often an imbalance between car performance and points total. The 2010 decider fit this bill exactly, with third-ranked Vettel in the middle of a searing patch of form.

2010 F1 season: Points accumulation by top five drivers, round by round

By contrast, the final round of 2012 failed to get my pulse racing because Vettel’s surge had already taken him a healthy distance ahead of his title rival. In fact, he led the championship for each of the preceding four races, by a double-digit margin in the latter three. Alonso faced having to overhaul a 10-point deficit with the third-best car in the field; he drove a canny race in his Ferrari, but it was never going to be enough.

To reinforce the point, we don’t have to look far to find the 2007 title-decider. This is often overshadowed by the last-lap excitement of the following season’s final race, bringing as it did a huge turnaround in the fortunes of Lewis Hamilton. However, with the two McLarens squabbling, 2007 saw Kimi Raikkonen sneak in and swipe the crown right at the end – aided and abetted by a stellar showing from Ferrari teammate Felipe Massa.

Only one point separated the three drivers at the chequered flag, but the third-ranked driver had once again had the pace – and the team orders – to overcome the odds.

2007 F1 season: Points accumulation by top four drivers, round by round

Even 2016 – the only blot on Hamilton’s Mercedes copybook – handed us similar dynamics to liven up the run-in of a season once more smothered by the Silver Arrows’ superiority. Hamilton’s retirement in Malaysia and tepid performance the following week in Japan gave teammate Nico Rosberg enough of an advantage that he was happy to plod in his teammate’s wake for the final four rounds.

Hamilton was able to reel in his risk-averse rival, and had enough speed not only to win the final race in Abu Dhabi but to back up Rosberg into traffic, hoping to demote him far enough to skew the points in his own favour.

Considering how far we’ve been from enjoying similar such finales in recent years, there are a few threads to pick at – most of them scarlet-red. We can rake through an array of mistakes and missed chances, particularly in 2017 and 2018, where Ferrari could have taken a much stronger challenge to Hamilton and Mercedes.

Previously the Prancing Horse’s unquestioned lead driver, Sebastian Vettel must himself account for failing to maintain the standards he set in his earlier years at Red Bull. Hamilton’s teammate, Valtteri Bottas, must also shoulder responsibility for providing a much lesser challenge than his predecessor Rosberg.

All that said, potential rivals have been thin on the ground for Mercedes these past six seasons, since the dawn of the hybrid-turbo era in Formula One. The dearth of final-round excitement is only one of numerous ill portents for the future of the sport, whose governors and teams – before the ongoing pandemic – were still to agree on the next raft of major regulation changes slated for 2021.

We’re pretty far down the rabbit-hole now. Restoring excitement to the sport will not be easy.