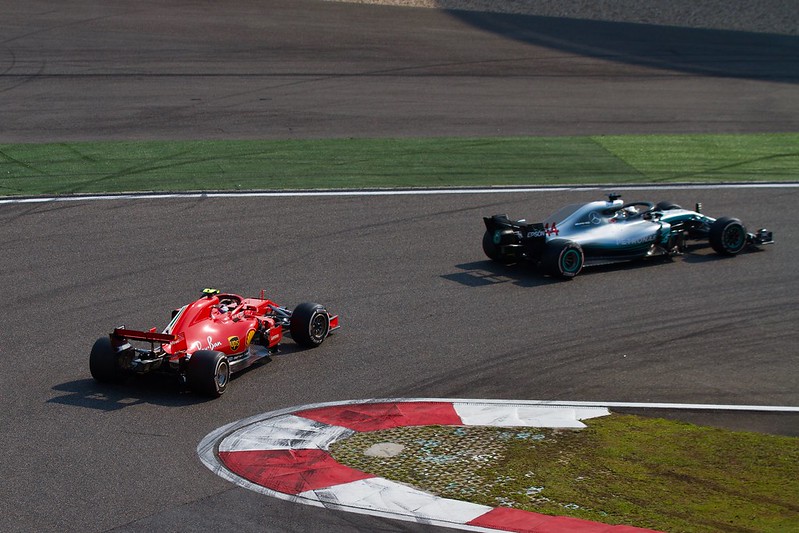 This post was originally published on my personal blog; I am removing it from there and archiving it here, where it belongs, with all my other F1 data geekery. Mercedes are odds-on this season to equal Ferrari’s record of six consecutive constructor’s world titles in Formula One.

The Prancing Horse achieved the sequence between 1999 and 2004, while the Silver Arrows have led unassailed since the beginning of the hybrid-turbo era of F1 in 2014.

Spells of prolonged, unchallenged domination in a sport often lead to it being labelled ‘boring’. Variety both indicates and promotes uncertainty, and this tends to make for a more exciting spectacle.

Naturally we might wonder, then, which of these two great eras of success has proven the most ‘boring’ by this rough definition. Is the current Mercedes dynasty really as bad as those old days of Ferrari supremacy? Remember, Ferrari didn’t just upset fans with team orders (most famously at the 2002 Austrian Grand Prix), they even got so bored one race that they tried to orchestrate a dead-heat finish between their two cars (2002 United States Grand Prix).

But why lean too heavily on our memories, when we can turn to data?

A logical place to start is the number of wins each team notched in their six-year title sequence.[1] Race day is where the trophies, the points, and the most television viewers will be found. It’s the bottom line; if race results are consistently the same, the excitement starts to drain away. 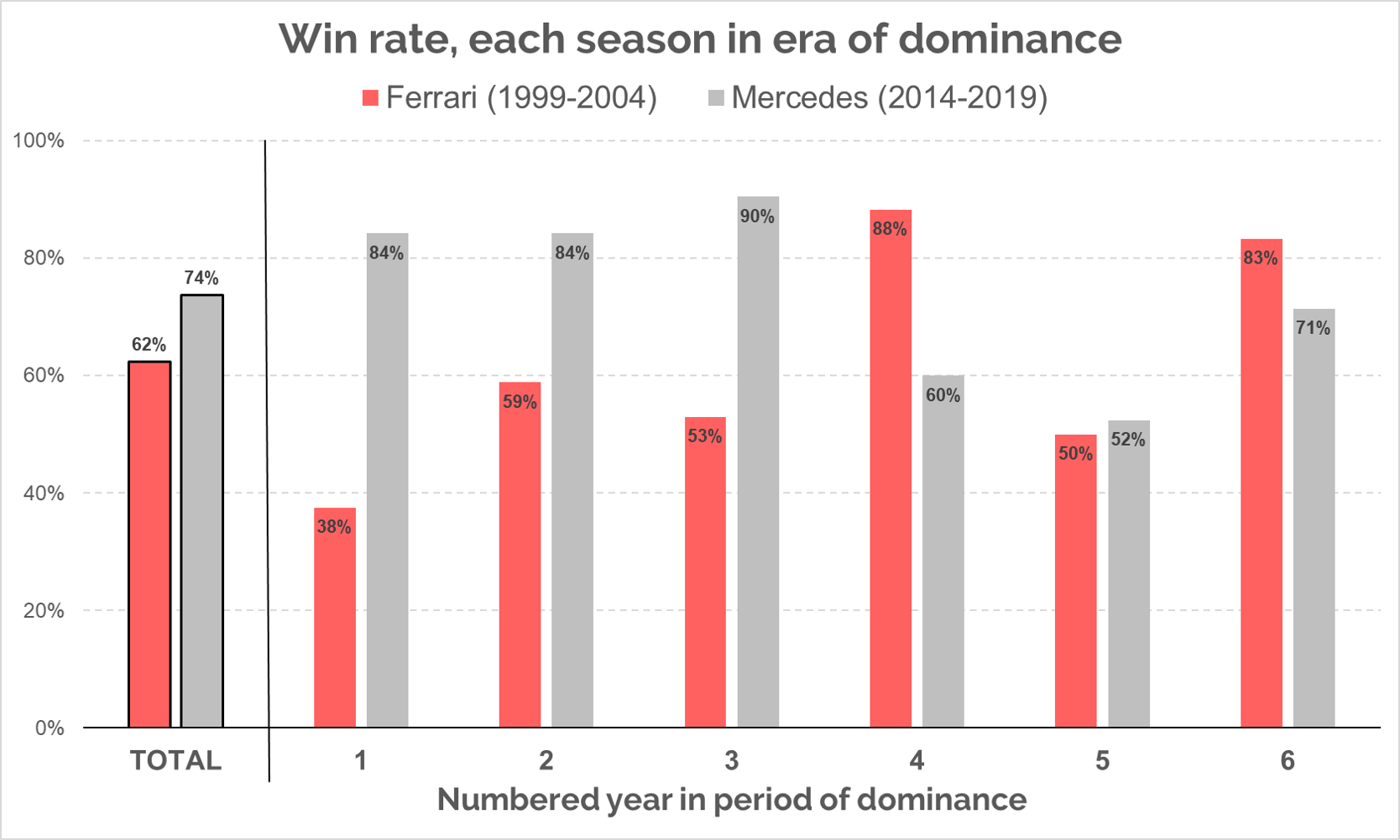 Mercedes have been a good chunk more dominant than Ferrari were, in terms of race wins. But let’s check the pole-position rates as well. After all, there is so much promise in qualifying, so much hope. Variety here would not only bring excitement in its own right, but would suggest that there might be some closer racing going on beneath those metronomic race results. 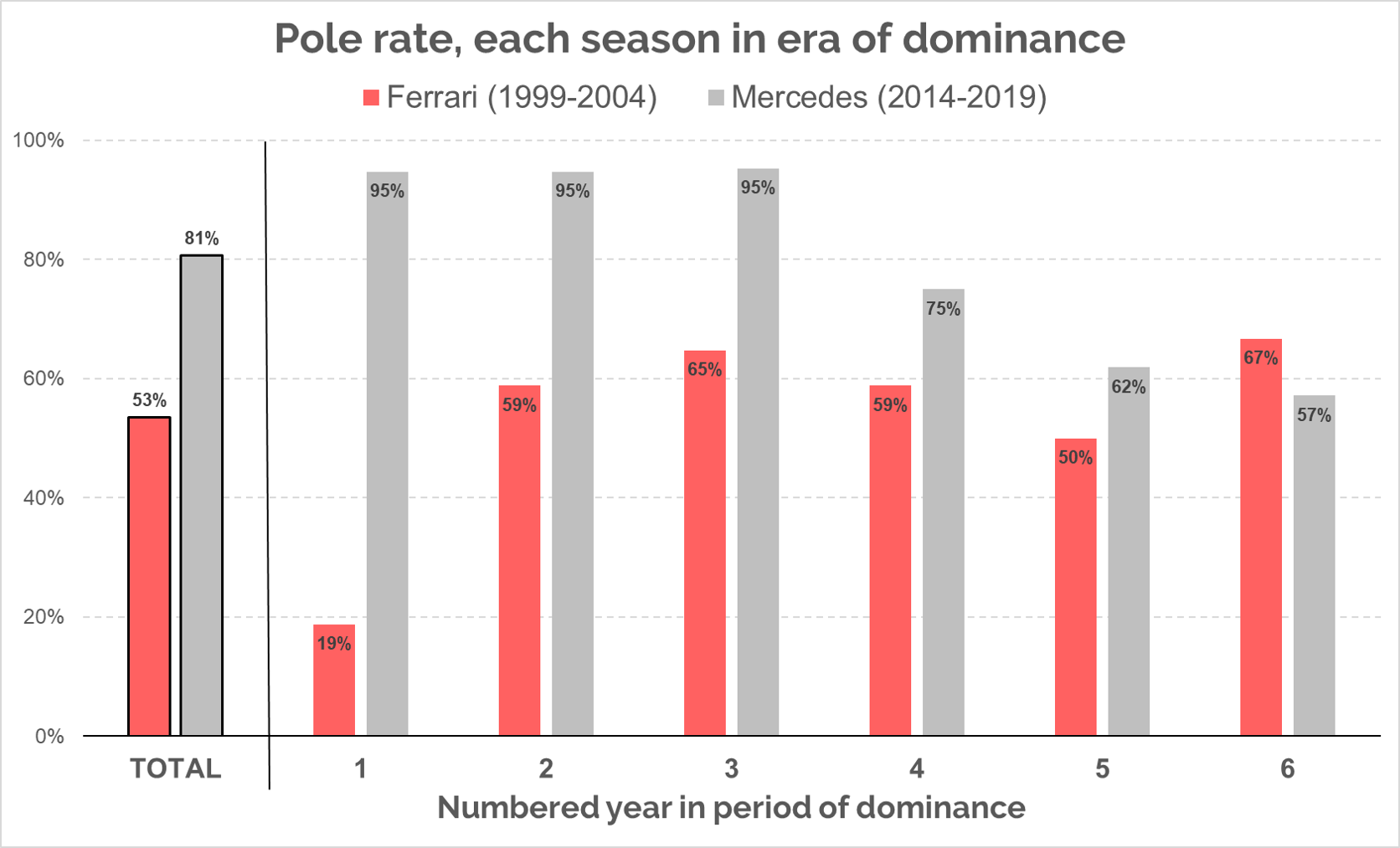 The divergence between Mercedes and Ferrari is even greater here. And the remaining share of both wins and pole positions was shared among more teams during the Ferrari era. Five other teams took at least one pole and win between 1999 and 2004 (Jordan, McLaren, Renault, Stewart, Williams). Only two other teams took a win these past six seasons (Ferrari, Red Bull).

The figures at the beginning of the hybrid-turbo era, from 2014 to 2016, are particularly astonishing. Mercedes took 56 of 59 available pole positions in that time – leaving one apiece to Ferrari, Red Bull and Williams.[2]

We can flesh this out by looking at each dominant team’s share of the maximum points available. In essence, how often did Ferrari and Mercedes clear up with a one-two finish (and, as of 2019, the one-point honour of the fastest race lap)? 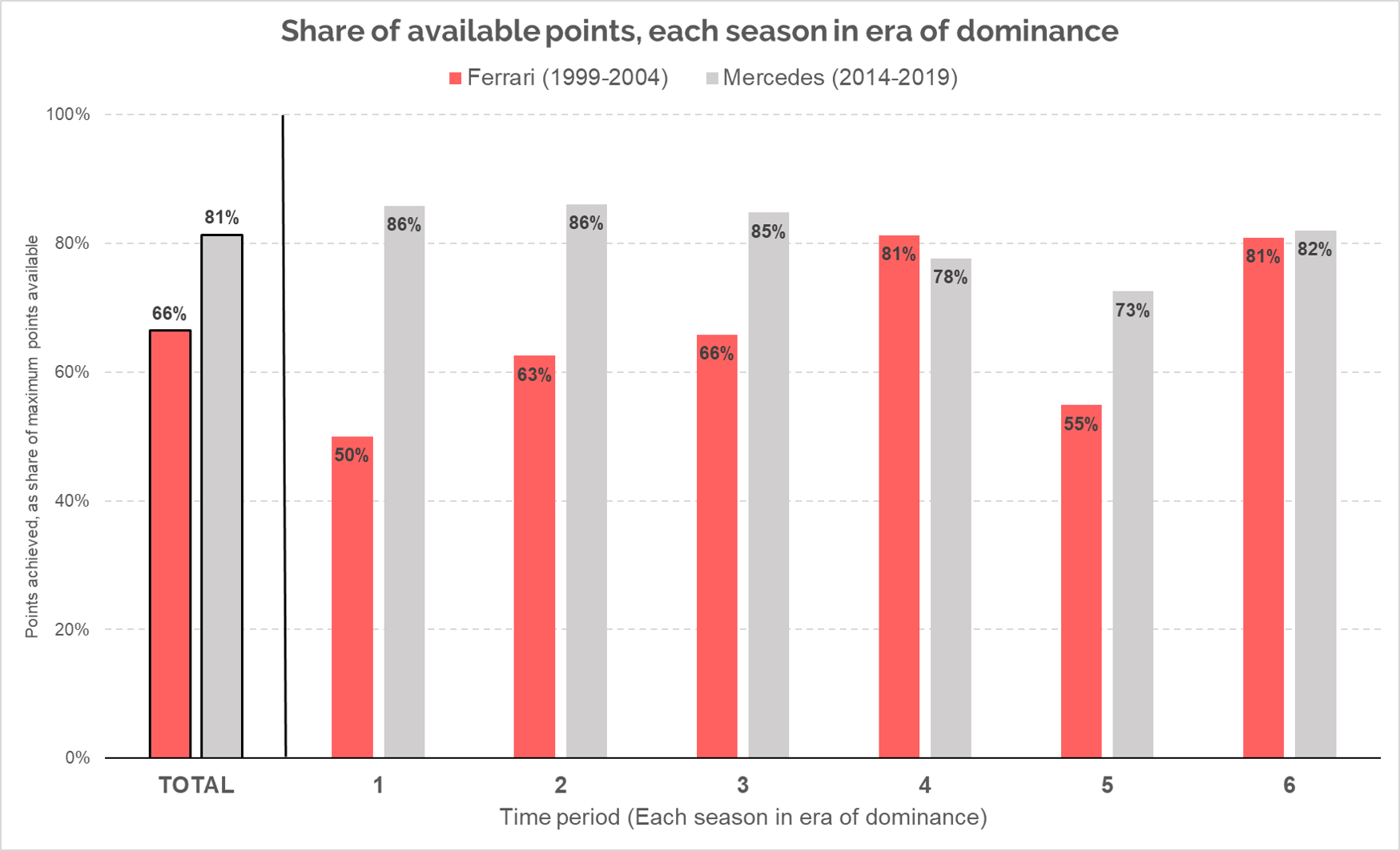 This corroborates the pattern we’ve already seen. From these angles, Mercedes seem to have had the more dominant era – but perhaps not the most boring one.

The reason we checked the share of points is because each team has more than one driver; ordinarily they have two (Ferrari had three in 1999). It’s one of Formula One’s favourite maxims that the first person a driver has to beat is his teammate. And if you have one dominant team, one car winning all the races, the whole sport starts to boil down to that competition between two teammates. It really would be boring if only one driver in that single competitive team was getting all the glory.

In that spirit, let’s look at how dependent these teams were on their top driver during their dominant years. 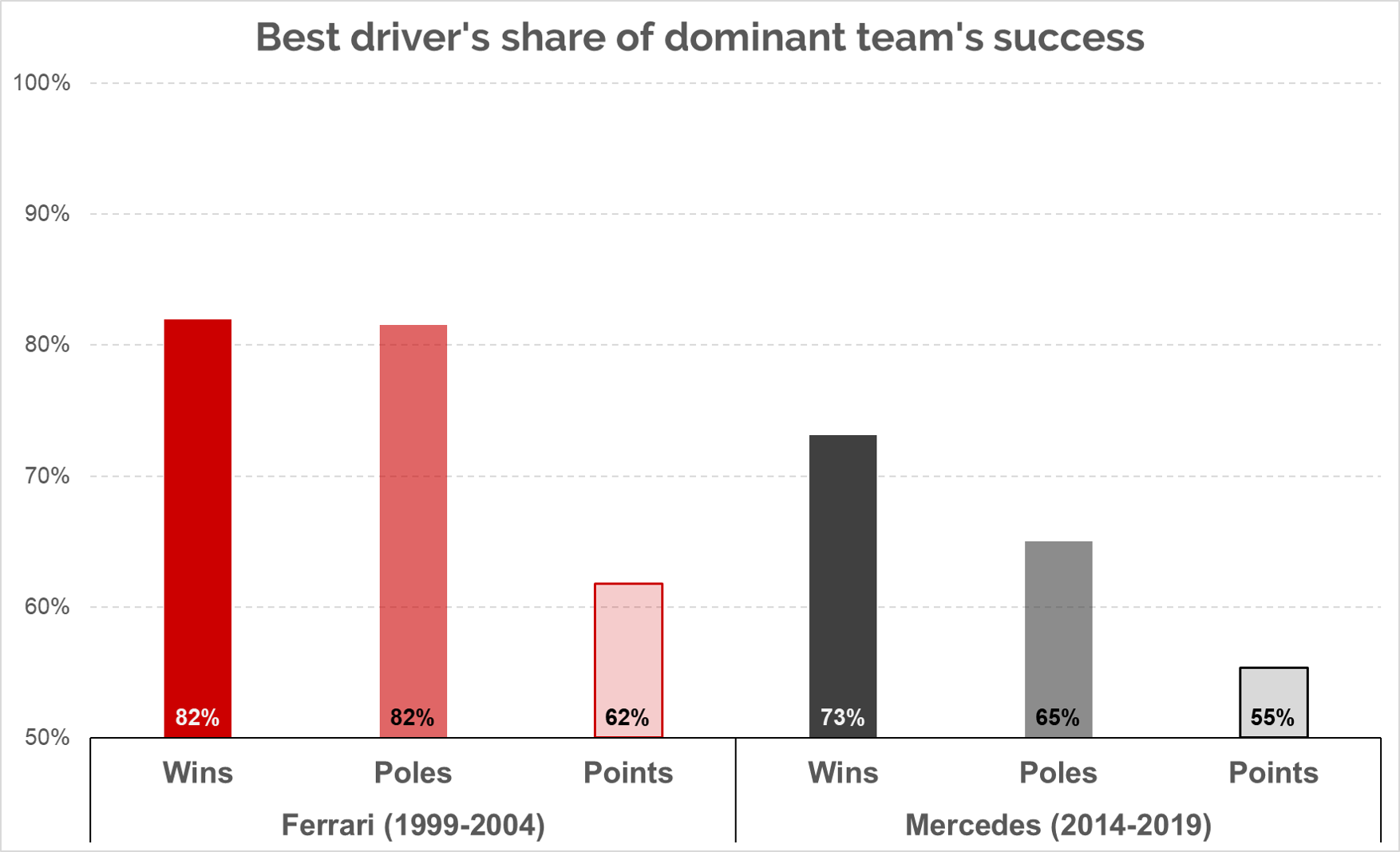 It’s clear that Ferrari were markedly more dependent on one driver for their wins, pole positions and points during their own era of dominance. That driver was Michael Schumacher every year except 1999, when the German missed most of the second half of the season with a broken leg and his teammate Eddie Irvine took up the title challenge.

Similarly, at Mercedes, Lewis Hamilton has been the top driver on points for five out of the last six years. The season he lost out, in the 2016 title battle with Nico Rosberg that went right to the wire, fans were averted from the boredom inherent in a top-team win ratio of 90% by the fact that the spoils were divided almost evenly between the team’s two drivers, making for a gripping spectacle.

Only last season did Lewis Hamilton manage to reach Schumacher-esque levels of dominance over his own teammate in terms of points won, and he hasn’t been able to maintain that in 2019 so far.[3]

So, although Mercedes have dominated the other teams far more effectively than Ferrari did in their own period of dominance, Ferrari’s success was much more focused on their top driver. Perhaps, beyond a certain point, if both teams can be said to have dominated, it’s at least more fun and uncertain now that Mercedes share the spoils more evenly among their drivers. But make no mistake: these win and pole ratios we’ve seen from the Silver Arrows, particularly between 2014 and 2016, are an incontestable buzz-kill for spectators.

A much deeper investigation could delve into the qualifying times, fastest race laps, and race-winning margins achieved by these two dominant teams during their time at the top, which would illustrate well the ‘futility factor’ felt by opponents and fans alike on race weekends. For now, let’s conclude that Mercedes haven’t quite managed to seal off all avenues of fun for F1 fans like Ferrari did back in the day. Still, there’s always next season, when they’ll be looking for a seventh straight constructor’s crown.

[1] Mercedes have not yet won the 2019 championship. I have used percentage shares rather than absolute values to allow for comparisons between 2019 and the previous, completed seasons.

[3] Note: the three different points systems used in F1 during these years will have directly affected the top driver’s share of the top team’s points. Between 1999 and 2002 (Ferrari, Years 1-4), 1st place yielded 10 points and 2nd place gave six. This is a 40% drop-down rate for the second driver, in the event the dominant team finishes 1st and 2nd. A change for 2003 saw this drop-down rate halve to 20%, as eight points were then awarded for 2nd place rather than six. This meant that the dominance of the top team’s top driver was less well reflected in his share of the team’s points. As of 2010, another new points system meant a drop-off rate of 28%, with 25 points awarded for 1st and 18 awarded for 2nd. These differences in the points differential between finishing positions – and the fact that points were given only to the top six before 2002, to the top eight from 2003 to 2009, and to the top 10 since 2010 – is best discussed elsewhere; we must accept the limitations of this indicative measurement here.