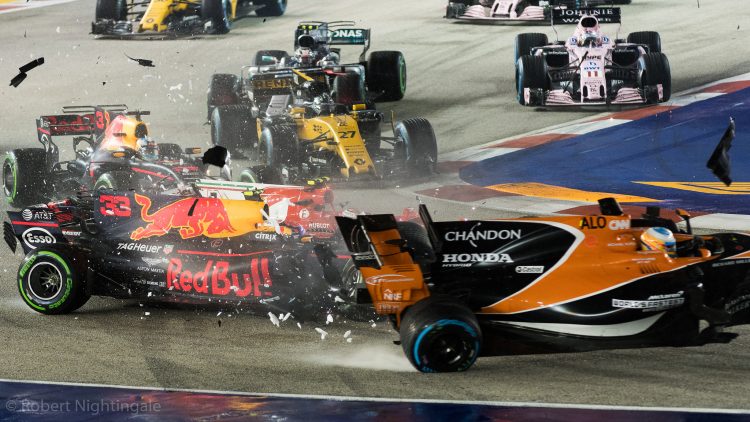 Testing for the new Formula One season has finally begun, all 10 teams having now unveiled their new cars.

A new model’s first mileage – or lack thereof – quickly beefs up or drowns out the bullish sentiments from drivers and team principals, particularly for those who have made big changes over the winter.

But, for all the new insights we can glean, the first test runs are still full of unknown quantities casting their shadow over the recorded lap times. Some teams will be sandbagging; others are fuelling light to build hype around their new challenger.

What still retains value among the noise of pre-season testing is the signal sent by the reliability data of last season.  There has been no change in the line-up of the 10 teams on the grid, though a few have swapped their engine provider.

Particularly key to performance in 2018 will be reliability – even more so than usual. This year, the regulations narrow to allow only three engines per driver for all 21 races. Mad as this seems, given the grid-penalty farce that plagues Formula One, it’s at least the same for everyone.

Here, then, are the retirement rankings for 2017. Teams are ranked by number of car failures leading to retirement, with retirements due to crashes added on top. 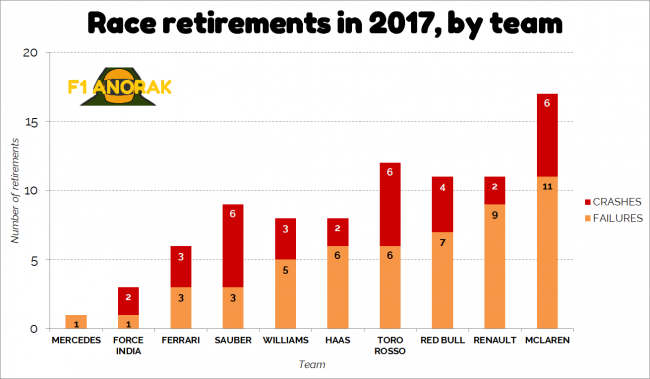 The chart provides one specific view of a dreadful all-round year for McLaren. They were paddock leaders in the overall retirements leaderboard for 2017. No team could match their staggering rate of 11 failure-enforced withdrawals (from 40 entries). And only Sauber and Toro Rosso registered as many retirements due to crashes.

McLaren may feel they have already taken the best step to remedying their problem: getting rid of their Honda power units.  That uninspiring engine deal has been picked up by Toro Rosso, who may have felt they had little to lose, trading in their Renault power units.

Although car-failure retirements as measured in the above chart are by no means restricted to engine failures, it is nonetheless notable that Renault powered each of the 2nd-, 3rd- and 4th-ranked teams in 2017.

37 days to lights out, 37 consecutive races in the points for @redbullracing

There have been lots of highs, a few lows, and plenty of shoeys since then 🍾#F1 #Unleash2018 pic.twitter.com/Xn7Vs00WKS

This is much more remarkable than it seems at first glance, given the team’s poor reliability in 2017 (joint-3rd highest number of retirements [11]) and their corresponding lack of race distance covered (8th of 10 [9,017km {74% of total}]).

The three Renault-powered cars filled the bottom three positions in 2017 for number of completed racing kilometres.  Of course, reliability isn’t everything: look at Haas and Sauber.  But it’s hard to ignore that champions Mercedes ranked top, completing 99% of the season’s racing laps. 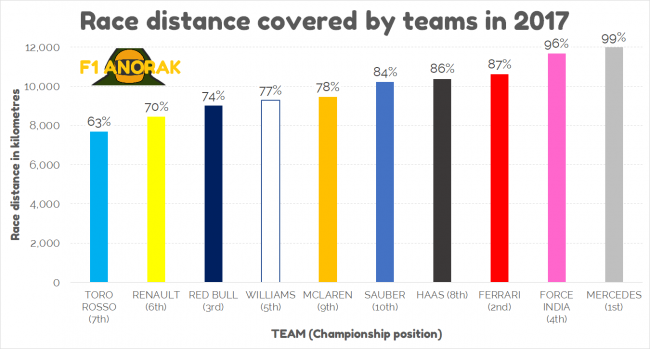 The irony born of the first day of testing in Barcelona was not lost on F1 fans.

Testing, it’s all about the mileage 🚗💨

Here’s how many laps and kilometres teams and engine suppliers racked up on the first day of #F1Testing pic.twitter.com/ZosT9uZNvM

McLaren, whose pre-2017 testing was so badly scuppered by the Honda engines, once more covered little ground.  Despite having switched to Renault power units for this season, the British marque finished up 9th for distance covered during the first day. This was less to with Renault, though, and more to do with the wheel that flew off Fernando Alonso’s car early on.

Renault, in fact, enjoyed a fruitful day as both works team and as engine provider.  The team clocked the second-highest number of laps – right behind their customer team, Red Bull. Has the French company solved its reliability issues?

Red Bull haven’t just established a run of 37 straight points finishes, they have won five races over the same period. If they can improve their reliability, and avoid so many incidents (especially on the first lap), then there is no reason why drivers Max Verstappen and Daniel Ricciardo cannot mount a championship challenge in 2018.