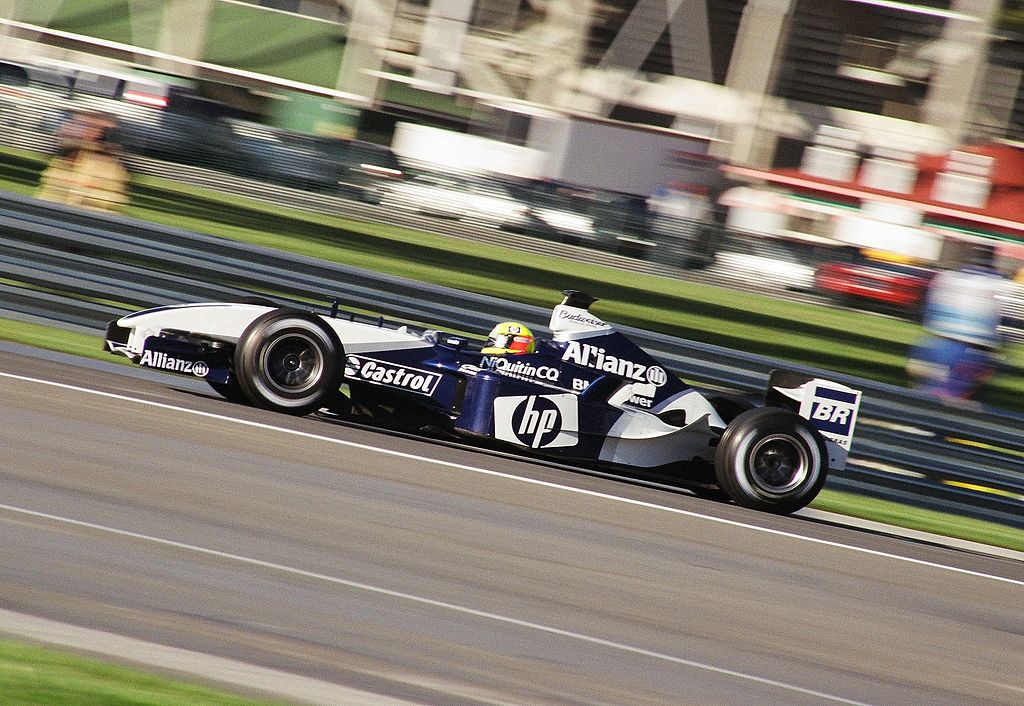 There was little indication that this would be the last time for Ralf Schumacher, or for the Williams team.

The victor of the French Grand Prix stood atop the podium on July 6, 2003 with his teammate – Juan Pablo Montoya – and his elder brother, Michael. He was third in the championship, closing to within 11 points of his 1st-placed sibling with this win; Montoya trailed his fellow Williams pilot by six points.

Williams were peerless all weekend. Having locked out the front row in qualifying, three tenths faster than their nearest rivals, they maintained their formation off the start line and motored into the distance.

Ralf very much had the measure of Juan Pablo. Keeping him at arm’s length in the first part of the race, Schumacher Jr allowed Montoya to close within two seconds approaching the final round of stops as traffic held him up. But in the sprint to the end, the Colombian faded badly and Schumacher was able to run free to the chequered flag.

Where the drivers went next

Michael, by contrast, had better competitive fortunes ahead with Ferrari: sixth and seventh world drivers’ titles, and an absorbing duel with Renault up-and-comer Fernando Alonso that saw the German just fail to take his tally to eight.

Montoya, like his teammate, would fade from here – taking two of only three Williams wins since, before departing for a season-and-a-half of trouble at McLaren at the end of 2004. Comprehensively outperformed by Kimi Raikkonen in 2005, registering only three wins to the Finn’s seven, Montoya left the team midway through 2006 to return to US racing series.

Ralf’s demise was more stark. Far from launching a late title tilt, the younger Schumacher scored points only once in the remaining six rounds of 2003. He finished a distant 6th in the final standings, though his run-in was marred by a concussion suffered in testing at Monza which meant he missed the penultimate race. Meanwhile teammate Montoya kept the Williams flag flying until trouble with the stewards at the US Grand Prix killed his challenge.

Schumacher might have been glad, in retrospect, to miss a trip to Indy, given what would befall him at that track in later years – though the concussion that prompted his absence was hauntingly prescient.

A high-speed crash on the Indianapolis banking in the opening laps of the 2004 race caused Ralf to suffer another concussion, and two fractures to his spinal column. The colossal crash registered the Williams car’s deceleration at 78G.

Schumacher missed the next six rounds. He signed to drive for Toyota during his recovery, returning for Williams to score a second-place in Japan behind his brother – the last-ever Schumacher 1-2 – and finished 9th in the championship.

Incredibly, Ralf found himself having another crash at the same corner at Indy in 2005 – thankfully this time with no major injuries. Though the FIA medical team recommended he sit out the race, he didn’t miss much. The tyre blowout that caused his Toyota to crash prompted all Michelin runners to withdraw, and Formula One’s now-infamous ‘six-car race’ went ahead to a chorus of boos.

Only three more podiums awaited Ralf in his three years at Toyota. He finished 6th in 2005, 10th in 2006, and was drummed out for all-round poor performances at the end of 2007. A test for the new Force India team did not yield a race seat for 2008 and Ralf moved to race German touring cars, never to return to F1.

What happened to the Williams team?

The Williams team’s own decline followed hot on the heels of Ralf’s, though much more closely correlated to the loss of BMW backing than the loss of their German driver.

With Williams-BMW unable to make a serious bid for the championship, a rift developed between the partners. BMW had agreed to supply engines for the team until 2009 but, dissatisfied with performance, decided to buy and rebrand the Sauber team. Williams opted for Cosworth engines for 2006; the relationship was severed, to significant effect.

Where the team had laboured to four podiums with Mark Webber and Nick Heidfeld in 2005, Webber and rookie teammate Nico Rosberg managed only five points-finishes between them in 2006. Three years with Toyota power followed, but it did as little for Williams as it had done for Schumacher. Though they scraped 4th place in 2007, performances remained underwhelming.

A two-year fling back with Cosworth in 2010 and 2011 had predictable results, ending the latter year a distant 9th in the constructors’ championship with just five points.

2012 gave the team their first win in nearly eight seasons – Pastor Maldonado stupefyingly taking the laurels from pole at the Spanish Grand Prix. Renault had returned, reforging the historically successful Williams-Renault partnership of the Nineties.

However, the fact that the team still finished the year 8th in the standings in 2012 shows how resolutely they failed to back up that solitary win with any other meaningful results. Maldonado could muster only four other points finishes in the 20-round season. Teammate Bruno Senna finished in the points 10 times, but never higher than 7th.

It took the dawn of the hybrid era and the adoption of Mercedes power units to propel Williams back toward the top end of the grid in 2014. Successive 3rd-placed championship finishes have restored some of the team’s pride. Though Lance Stroll’s podium at the Azerbaijan Grand Prix was only the team’s second in the last two seasons, Williams are now regular points-scorers after 40 years in the sport.

Whether they will ever challenge for another title, however, remains doubtful.

3 thoughts on “On this day: Williams’ last gasp of domination in 2003”